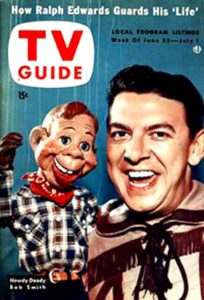 Howdy Doody broadcast its final episode on September 24, 1960. That means I have absolutely no recollection of ever seeing it. But there are a bunch of you Boomers out there who outrank me, age-wise, including my oldest brother. And you have spoken. And I have responded with today’s article about the original king of kid shows: Howdy Doody.

One of television’s first original shows, i.e. not a converted radio program (it barely qualifies. Read on), Howdy Doody first appeared in 1947. That means its original viewers were too old to be classified Baby Boomers! Oh well, so were the first users of yo-yos, Lincoln Logs, and erector sets.

But Howdy Doody is a very precious part of the memories of the more senior members of the Boomer generation. So, big kids, as I used to call you many years ago, today’s piece is for you.

Howdy Doody had a rather limited audience in its inception. After all, there were about 20,000 televisions in the entire United States when it debuted. But it was a hit among its fledgling audience, especially among the audience’s fledglings.

NBC New York radio affiliate WEAF had a hit show in 1947 called The Triple B Ranch. The three Bs stood for Big Brother Bob Smith, who spoke with the country bumpkin voice of a ranch hand and greeted the radio audience with, “Oh, ho, ho, howdy doody.” Martin Stone, Smith’s agent, suggested putting Howdy on television. He approached NBC television programming guru Warren Wade. NBC liked the idea. They launched Puppet Playhouse on 17 December 1947. A week later the name of the program was changed to The Howdy Doody Show.

Smith’s puppet stole the show, as well as its name. 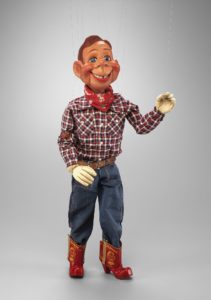 The incarnation of Howdy Doody that appeared the first few episodes was a bumpkin, in keeping with Smith’s radio voice. A dispute over royalties and licensing led to his creator taking the original puppet with him and leaving. Howdy was reincarnated as the red-haired All-American boy, with a freckle for each state in the union. That would be 48.

Clarabell was known as the silent, klutzy clown who would douse others with a seltzer bottle. He was perhaps the most loved character, after the show’s two stars, of course.

The show began a tradition that has extended through Bugs Bunny, Bullwinkle, right down to Sponge Bob Squarepants: the parents get just as hooked as the kids. Its early-evening timeslot ensured that elders would view the program.

But eventually, the show was moved to a weekly Saturday morning slot. And it stopped making money. With that, in September, 1960, it slid off into the sunset. 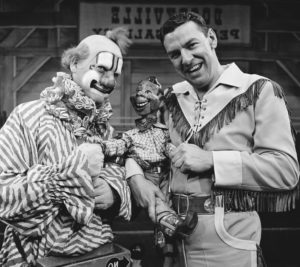 That final episode was immortalized by silent Clarabell speaking for the first time. I hereby post a quote from Wikipedia:

The episode was mostly a fond look back at all the highlights of the show’s past. Meanwhile, in the midst of it all, Clarabell has what he calls “a big surprise”. The rest of the cast attempt to find out the surprise throughout the entire show, with only Mayor Phineas T. Bluster succeeding, and promising to keep it a secret. Finally, in the closing moments, the surprise was disclosed through pantomime to Buffalo Bob and Howdy Doody. “You mean…you can talk??” said Bob. “Why, golly…I can’t believe it!” Howdy Doody exclaimed. “You can talk?!” Bob asked again. Clarabell nodded. “Well”, Bob continued, gently shaking the clown’s shoulders, “Clarabell, this is your last chance! If you really can talk, prove it…let’s hear you say something!” A drumroll began as Clarabell faced the camera as it came in for an extreme closeup. His lips quivered as the drumroll continued. When it stopped, Clarabell simply said softly “Goodbye, kids”, and the picture faded to black. Lew Anderson’s (Clarabell’s) genuine tears upon delivering the only line Clarabell ever spoke in 13 years, made this one of the most poignant moments in television history. The recently discovered and restored color videotape of the final broadcast is now available commercially.

Wow. Amazing stuff. And I thought St. Elsewhere had a great closing episode.

Here’s to a show that broke ground in lots of ways, and that is a wonderful member of countless Baby Boomers’ memory banks.