It all started with a fellow by the name of George Wagner. Wagner was a short-statured high school wrestling champion who tried to make it as a professional wrestler. The sport was not exactly a raging success. Opponents would frequently lock each other up in clinches that kept them virtually motionless for minutes at a time.

Wagner decided to take a walk on the wild side. He grew his hair long, dyed it platinum blond, started using a valet to assist him in his lengthy strolls to the ring, accompanied by the playing of Pomp and Circumstance. His valet would spray his corner (and sometimes his opponent) with disinfectant and perfume. Eventually, the match would ensue. Gorgeous George, as he was now known, would blatantly cheat and gain victory.

Half of the crowd hated his guts. The other half loved him. They all ponied up bucks for tickets. Television, a new medium in the 1940’s, started showing his antics. Professional wrestling, as we know it, was born. 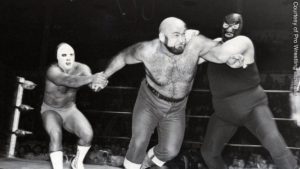 By the 1960’s, there were lots of local wrestling associations all over the US. Many of them had local television shows that would show matches that were intended to draw the audience into showing up for a live show later.

These matches included some home-grown wrestlers who made a few bucks getting “whipped” by “legitimate” stars who competed for local and national titles.

In my area, the contenders included Cowboy Bill Watts and Wahoo McDaniel, who were OU football stars and who also played in the NFL. They wrestled for Jim Crockett Productions, which ran many of the local wrestling outfits.

Also-rans I recall included Apache Gringo, who wore 74 on his shirt to remind him of what year it was. Another was Grizzly Smith, a huge fellow who wrestled in overalls. And of course, there were many villains who hid behind masks.

I loved how the old ladies, cigarettes in corners of mouths, would work themselves into rages at the antics of the combatants. It wasn’t uncommon for one of them to pick up her metal folding chair and go after one of them.

Today, wrestling is BIG business. But I have fond memories of those working stiffs who would take dives for the champs just in time for the show to end on time. Here’s to Saturday afternoons watching Apache Gringo.