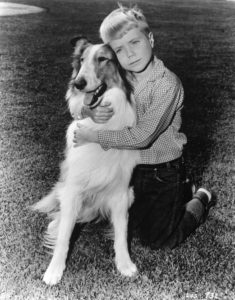 The power of television is immense. When you see a collie, more particularly a rough collie with brown hair, the name “Lassie” immediately enters into your mind.

Lassie, the literary dog, originated with British author Eric Knight in a short story published in the Saturday Evening Post in 1938. The story was a hit, and it led to a novel written two years later by Knight called Lassie Come Home. The book was likewise greatly successful, and in 1943, the movie Lassie Come Home was released, starring Roddy McDowell. Elizabeth Taylor was also in the film. Once again, it was a smash. People couldn’t get enough of Lassie.

A radio series followed in 1947 that ran until 1950. Soon after, it was time to put Lassie on television.

In 1954, Lassie the television series premiered. It starred a male dog named Pal. Pal was also the star of the original Lassie movie of twelve years earlier. As every Lassie fan already knows, the female Lassie has always been played by larger male dogs, mainly because that way they don’t have to go through so many child stars. More on that later.

Anyhow, Pal played Lassie in the first two episodes of the series. Then he stepped aside for one of his descendants. And every Lassie afterwards on television was a descendant of Pal. by the way, Pal lived to the ripe old dog age of eighteen.

So the dog situation was handled. But those pesky child stars kept growing up.

So for the first four seasons, we had Jeff Miller. At the beginning of the fourth season, Timmy made his appearance as a runaway from a family of crippled and aged members. The Millers (Lassie’s owners) suggest to a social worker that Timmy spend the summer on the farm for its healthy influence. And since it was the 50’s, the social worker thought that was a great idea.

When Timmy became a teenager in 1964, the whole child actor scenario was abandoned in favor of adult companions. Characters from the series hung around as the Millers hit the road, so viewers wouldn’t get too confused.

Of course, the public didn’t have any problems keeping up, because the true star of the series was Lassie her-himself. The humans were simply add-ons to a dog’s TV show.

Of course, Lassie’s ratings weren’t hurt by the fact that two of its earlier actresses were played by Cloris Leachman and June Lockhart in all their 1950’s beauty.

Lassie the show hung around on the CBS schedule until 1971. It survived an additional two years in syndication. It was a great 17-year run for a show that every Baby Boomer can remember vividly.

Oh, one last thing. Lassie never saved Timmy from falling into a well. Though the heroic pooch did come to the rescue of at least two hapless humanoids who encountered that fate, Timmy was fortunate enough to avoid that particular crisis.