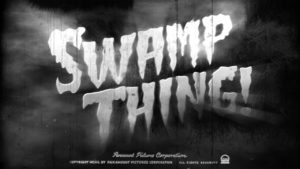 The elder statesmen of the Boomer generation have memories of watching some pretty scary flicks in theaters in the 50’s. That decade is considered by many to be the penultimate era of the horror movie. A website (now gone) site listed 72 movies of the genre that were produced between 1950 and 1959.

So what happened to all of those flicks, many of which were shot on a shoestring budget? And, for that matter, what about all of those Lon Chaney (Jr. and Sr., Warren! R.I.P.), Bela Lugosi, and Boris Karloff classics from the 30’s and beyond? Would they be doomed to disappearance, as has been the case of thousands of films whose very material existence disintegrated?

Not a chance. Local TV stations saved the horror movie.

In the 60’s (like today), days lasted 24 hours. However, the network that a local station was affiliated with would provide a limited amount of programming. That meant that a station would have to fill in the dead air time with SOMETHING. After all, if you ever broadcast static when viewers were in the mood to watch TV, you might permanently lose an audience. 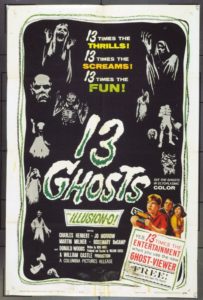 Weeknights of the 60’s and early 70’s had Johnny Carson, Joey Bishop, and Dick Cavett to fill the 10:30 (11:30 to you east and west coasters) to signoff slots. But on Saturday nights, before NBC’s groundbreaking SNL, they were on their own.

Well, time for a reality check. Who watches TV on Saturday nights late? Dudes who don’t have dates, and kids. After all, our WWII generation parents would turn in by 10:00. So what would appeal to that demographic (and meet strict FCC regulations, wink wink, nudge nudge, say no more)?

Ergo, the profligation of Saturday night horror movie-fests on our local stations.

Dimension 16 began shortly after UHF station KUHI out of Joplin, Mo. began broadcasting. UHF stations of the 50’s got a royal screwing, thanks to FCC regs of the 50’s, but by the next decade, they had a shot at real profits. New TV’s were being built with the ability to receive the channels above thirteen. Joplin affiliate KUHI began broadcasting in September, 1967. The brand new station (unviewable by thousands with 50’s era TV’s) was looking for programming to fill vast hours, and launched Dimension 16 as a 10:30 Saturday night offering.

The show would feature a moderator who would introduce the black and white horror movie and pop back in at commercial breaks to throw a few yuks at the audience before the next batch of local business’s ads would air while viewers went to the can or grabbed another beer.

The premise was repeated at TV stations all over the nation, and forgettable B movies like The Leech Woman, Tarantula, and Dead Man’s Eyes were played over and over to eager audiences. Of course, genuine classics like Frankenstein, Dracula, and The Werewolf also got lots of airplay.

The Saturday night horror flick show has passed, as have so many other things we grew up with and assumed would always exist, Fortunately, the movies we watched have been preserved. Sadly, many Hollywood classics have physically vanished because their master films have disintegrated. But thanks to the demand for horror movies by local stations in the 60’s, The Leech Woman survives!