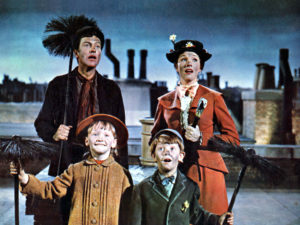 The year was 1964. I was five years old, and already terrified of fantasy movies. After all, those flying monkeys in The Wizard of Oz were giving me nightmares on a weekly basis.

But a movie came out that year that mom forced my fifteen-year-old brother take me to see. His eyes nearly rolled around 360 degrees as he paid our admission into the Coleman Theater in Miami, Oklahoma that year. But I suspect he might have secretly enjoyed watching Julie Andrews, beautiful even in her veddy Victorian getup.

The flick was the immortal Mary Poppins, a marvelous mix of animation, live action, and the most dazzling special effects that were available in 1964.

It also featured Dick Van Dyke as the Cockney chimney sweep, so you know this film was bound for glory.

I count myself very fortunate to have seen it in its initial release. It was the talk of the nation, and for good reason. It was excellent.

Mary was conceived in the mind of British author P.L. Travers. She was the nanny who blew in on a windstorm and took over the Banks’ household, teaching the children some much-needed manners, but with everyone having fun at the same time.

Travers demanded script approval rights before consenting to allowing Disney Studios the rights to his book. Disney, against Travers’ suspicions, did an incredibly good job of adapting his literary creation to film. He gave it his stamp of approval, and one of the world’s most beloved movies was released.

Today, kids still grow up with DVD versions of the film. But we Boomers fondly remember going to the theater to see it for the first time.