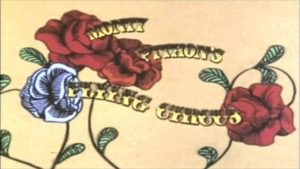 Public Television in the US was launched in 1967. Before that, it had been known as Educational Television. It was a hodgepodge of non-commercial programs that ran without advertising, or government intervention. It was largely supported by contributions, with a little tax money thrown in.

Public Television stations were pretty rare about then. KOED, the Tulsa affiliate, actually began operation in early 1959. It was one of the first. many metropolitan areas didn’t get PBS affiliates until the 70’s.

But it didn’t take long for the upstart network to get some programming that attracted the attention of viewers. These included Sesame Street, Masterpiece Theater, and a British import known as Monty Python’s Flying Circus.

When word got out that these excellent offerings were being shown on the funky, commercial-free (but telethon-laden) network, the public began demanding PBS stations in the various areas they called home. 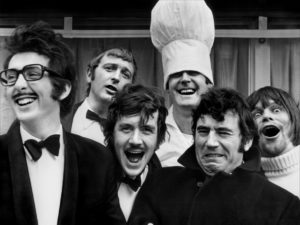 Monty Python was a big hit in England, when it debuted in 1969. But it soon became a worldwide phenomenon with its airing over American PBS stations.

Its premise was too good to ever have been spawned over here. The closest we came was SNL’s Not Ready for Prime Time Players. You see, Monty Python’s Flying Circus assumed that its audience was smarter than a shrubbery. Their humor explored such intellectual ground as philosophy, literature, and history. And if you didn’t know who Immanuel Kant was, they figured you would look him up, and find out why it was funny to refer to him as a drunk.

The writing was brilliant. So was the ensemble.

Audiences were treated to sketches that forced them to think, even though they involved dead parrots, giant cats, and lots of guys dressed like women. I remember staying up until 10:00 on Saturday nights to watch MPFC on the local PBS station and laughing until I had tears. Then, later on, when Mayberry RFD would come on, I would shake my head sadly.

The cast all went on to bigger and better things, further proof of their genius. Idle, Cleese, Palin, and Jones are familiar faces on TV and the big screen. Chapman was a fixture on American TV before his untimely 1989 death from pneumonia. Gilliam co-directed the smash Monty Python and the Holy Grail with Jones, then went on to direct Twelve Monkeys, The Fisher King, and Fear and Loathing in Las Vegas, among other successful films.

And what additions they have made to the English language! For example, the word “pythonesque” is found in the Oxford English Dictionary. And what internet surfer isn’t familiar with “spam?” And when someone coughs noticeably in cubicleland, who hasn’t heard “bring out yer dead!”

The timeless episodes, with all of their references to non-current events, are as much fun to watch now as when we were much younger.

So here’s to Monty Python’s Flying Circus: an acme that television may never again reach.