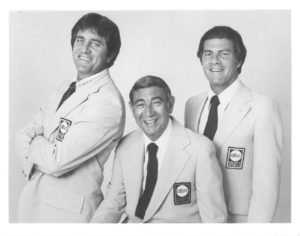 One summer day in 1970, my mom pulled me aside to have a serious chat with me. She said “You know my favorite show is on Monday night. I just saw a commercial that said they’re going to be showing football on Monday night. Don’t tell your dad, it may just go away.”

I didn’t really get into sports until I was nine years old. That was the first year I really listened to the World series on radio and became a lifelong Cardinal fan.

Football followed naturally, and Monday Night Football turned up just in time to get me hooked. I know dad and I watched that first season together, but I really don’t remember Keith Jackson. However, I do remember Don Meredith. I was excited because I had a Topps 1969 football card with his picture on it.

Howard didn’t make that big an impression on me until I was in my teens, when I found his abrasive style unbearable. I watched many a late 1970’s era game with the sound off and good music playing on the stereo. Dad couldn’t stand him either, and he would turn the radio on and we would listen to the immortal Jack Buck and Hank Stram.

Years later, I watched the TNT movie called Monday Night Mayhem. John Turturro’s brilliant portrayal of Cosell gave me a newfound respect for the man. He simply enjoyed skewering players who thought too much of themselves.

I would love to hear him interview NFL problem children like Terrel Owens. I suspect it wouldn’t be pretty (for Owens).