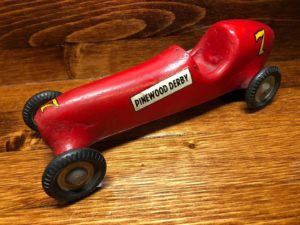 The year was 1967. I was in the second grade. I was in class wearing my spiffy Cub Scout uniform, along with the other classmates who were members of the local pack. We had a den meeting after school that day, and we wore our uniforms to school.

But this afternoon’s meeting was a special one. We were to receive our Pinewood Derby kits!

The denmaster had been talking about the Pinewood Derby for weeks, building up our anticipation to nearly the breaking point in the process. I mean, what could be cooler than cars screaming down a track, with the winning entry getting a real trophy?

The concept of cars screaming down tracks is a natural thriller for young boys. That’s why Hot Wheels was such an instant hit. But Hot Wheels wasn’t around yet in 1967. So we Cub Scouts were able to get our speed rush via the Pinewood Derby.

That afternoon, we were finally given our kits, along with instructions to have our fathers help us transform them into screaming machines driven by gravity alone.

Interestingly, nearly every boy in the room had fathers AND mothers living in the same home back then. Today’s instructions no doubt mention visitation circumstances. 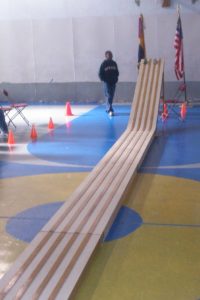 Anyhow, we ran home as eagerly as we could with our prizes. And as soon as dad had some time to spare, we went to work.

Dads got as big a kick out of making the cars as did the kids, as I recall. The big blocks of wood would require carving, cutting, sanding, painting, waxing, and strategic weighting. These activities were far over the head of a seven-year-old, so help was essential.

The key for dads, though, was knowing where to draw the line between “helping” and handling the whole process themselves.

My dad did great. He handled the carving parts, but let me do the sanding and spray painting (my car was a jet black, a color we just happened to have sitting on the garage shelf). I nailed the wheels on, and dad screwed fishing sinkers to the underbelly. I would say that he did exactly as the originator of the program, Don Murphy, was hoping for in 1953 when it all started.

The derby itself took place in the lunchroom of Nichols School in Miami, Oklahoma. The tables and chairs had been folded away that Friday night, and the magical track was set up in the middle of the room. It was the most gorgeous thing I’d ever seen. The room was full of excited kids and parents as the competition began.

My beautiful jet black racer was unfortunately not very fast. I remember winning one heat on the two-lane track, and getting blown away in the second round. Trophies were awarded to the top three finishers in each division (Wolf, Bear, Webelos). Everyone else got a ribbon. Needless to say, I was a ribbon winner.

But I still have fond memories of that night. And it did indeed bring a father and son closer together. I discussed that Pinewood car with dad many years later, and he still remembered it.

In researching the Pinewood Derby, I found several sites that offer guarantees of winning cars if you buy their plans, or you get your money back. But I like to think that there are still a few fathers out there who have the time to spend with their sons to build a racer completely from scratch, using only the designs in their collective heads, and possibly even beating out cars that are “guaranteed” to win.