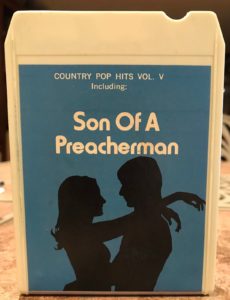 Man, this is an obscure one. I couldn’t find anything but a brief mention on a site or two. So I guess I will hereby become the official source of internet information on sound-alike eight-track tapes.

These things were hawked on TV commercials in the early 1970’s. One in particular I recall was “Summer ’71.” Instead of paying royalties to the original artists of the songs featured in these collections of hits, the producers of these tapes would hire a band that would do their best to sound exactly like them.

It seems like a strange concept now, but it was big business in the 70’s. 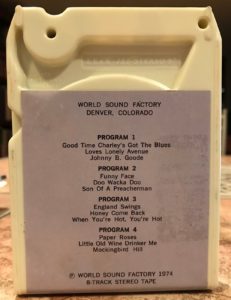 If you watched as much television in the summer as I did, you soon had the samples of the songs played in the commercials memorized. As I write this piece, I can hear those Summer ’71 songs streaming through my mind . . . Brand New Key . . . American Pie . . . Drowning in a Sea of Love . . .

What you had to do was look out for generic labels, like the one pictured. Many times, the buyer of such tapes was surprised to hear someone who ALMOST sounded like, say, Chaka Khan instead of the real deal.

But the funny thing was that you still listened to them. The songs still sounded pretty darned good. And presumably, money was made, even though the tapes cost about half the price of the genuine article.

Probably the least compensated were the bands themselves. One in particular I recall was called “The Sound Effects.” I tried to research them, nada. I imagine these gigs covered the cost of rent and hamburgers, that was about it.

So the next time you pop your flash drive full of mp3’s into your high-tech car stereo, pause for a moment and remember when you used to jam to “A Tribute to Helen Reddy.” It only cost $2.99.

Thanks to Elk Bugles for the images.