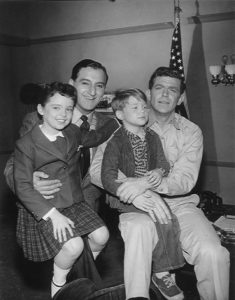 Some of our memories as Boomers are so universal that we take them for granted. Practically all of us had TV’s in our households, or if not, we still had regular access to them. And the odds are overwhelming that 99.99% of us are familiar with a little town in North Carolina called Mayberry.

The Andy Griffith Show was a spinoff of The Danny Thomas Show. On February 15, 1960, an episode aired where Danny was detained by a small-town sheriff for running a stop sign. Outraged at the size of the fine, Thomas elected to sit in jail rather than pay. While in the hoosegow, he observed Sheriff Taylor’s kindly ways in dealing with Opie, his son, Otis, the town drunk (played by Frank Cady, who would go on to star as Mr. Drucker in multiple TV series), and Henrietta Perkins, played by Francis Bavier. Yes, the character names and actors were familiar, but their roles were not yet established as we know them.

The episode was a hit, and plans were made to launch a series that fall based on Mayberry’s day-to-day small-town activities. Andy Griffith was a hit from the word go, and never fell below #7 on the Nielsen ratings for its entire eight-year run.

An actor named Don Knotts watched the Danny Thomas episode and called his friend Andy Griffith when he got word that a new series was in the works. He suggested that Sheriff Taylor would need a deputy, and Griffith agreed.

Thus, the opening episode featured Deputy Barney Fife, cousin to Andy. The family relationship was mentioned again in the second episode, then never brought up again.

The show featured a host of unforgettable characters, each with their own idiosyncrasies. Francis Bavier ended up cast as Aunt Bee, of course. There was Gomer Pyle, the simple-minded but lovable gas station attendant. Floyd the barber had many a good story, but would frequently get mixed up in the midst of telling them. Otis the town drunk knew where the keys to his cell were hanging, so he could let himself in and out as needed. Ernest T. Bass was an antisocial who delighted in throwing rocks. The Darling clan was always in trouble for moonshine, but they played some soulful bluegrass during their periods of detainment.

The public fell in love with the show at first site, but the critics? Not so much. It was ridiculed as “corn-pone humor,” an initial source of discouragement to Griffith. The reviews were soon forgotten as the show streaked towards the top in popularity, finishing its first season at #4.

The writers focused on milking the eccentricities of the characters, and the result was brilliant episode after brilliant episode. Barney became well identified as being gung-ho, courageous to a fault, and too quick on the trigger, both figuratively and literally. His idea of stopping crime?Nip it in the bud! It was great stuff when he would emerge from romantic encounters with Thelma Lou with his hair pointing every which way. Indeed, there was enough potential with Deputy Fife that he might have spawned his own spinoff.

Fortunately, that never happened. The chemistry between Taylor and Fife was simply perfect, and many have sought to duplicate it in subsequent sitcoms with little success.

Season six saw some dramatic changes. First off, the show went from black and white to color. Second, Don Knotts left the series, replaced by comedian Jack Burns as Warren Ferguson. Third, many of the initial writers left, and were replaced by a crew who took the show in a different direction.

While the ratings remained sky-high, in retrospect, most agree that it all amounted to an overall downhill turn for the series.

While slapstick was the rule in the B&W days, now, the jokes became fewer and farther between. As I recall, most episodes involved someone getting their feelings hurt. Sheriff Taylor became more of an urbane, sophisticated individual who would wisely direct who should apologize to whom. It wasn’t as much fun.

Thus, the majority agreed at jumptheshark.com that going from black and white to color was the moment that The Andy Griffith Show ceased to matter.

On a sad side note, isn’t it a shame that the great site that was Jump the Shark so horribly jumped its own shark when bought out by TV Guide?

However, Andy Griffith aired its final 1968 episode while sitting alone atop the Nielsen heap.

Many cast members went on to appear in Mayberry RFD, a regrettable follow-up which nonetheless survived until CBS’s 1971 Great Rural Purge.

It’s interesting to me that sitcoms continue to push the envelope of what’s allowed for broadcast television, daring more and more with suggestiveness, language, and controversy in an effort to capture the attention of audiences. Perhaps creative minds should look at the timeless success of the first five seasons of The Andy Griffith Show, now more popular than ever. The newest generations relate just as well to the little town of Mayberry as we Boomers do.