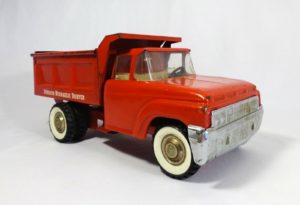 Tonkas were the undisputed king of rough, tough outdoor play in the 1960’s dirt. But there was another brand, nearly as popular, that Boomer kids played with by the millions: Structo.

I remember my mom making an offhand remark once about how Structo toys were of high quality. In researching this article, I learned that it may well have been that she had personal childhood recollections of Structo toys. They had been around that long.

Indeed, Tonka was the newcomer. Structo had been delighting kids with high-quality, built-to-last toys since before the US entered the Great War.

They managed to change with the times, so that by the Summer of Love, they could be found in nearly as many toyboxes as their better-selling cousins. 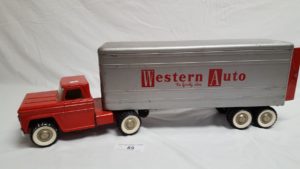 Structo began in 1915 with the production of its structural “model building sets.” These were basically erector sets. They cranked them out until 1918, when they sold their designs to a British company called Meccano. The sets eventually found their way back to the US, this time with a more familiar brand name of A.C. Gilbert.

In the meantime, Structo had changed directions, beginning to market miniaturized versions of motorized conveyances. They recognized early on the magical fascination that kids had with them in 1918, and even more so ninety years later.

Structo survived the Great Depression, and also weathered the scarcity of metal during WWII. They managed to keep innovating and turning a profit the whole time. By the time the war was over and the economy was waking back up, they were ready to begin selling in earnest to the parents of kids who now had a few bucks in their pockets, as well as fond remembrances of Structo toys from their own youths. 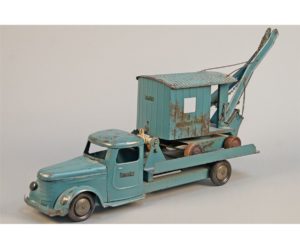 Thus, the older members of the Boomer generation can probably recall durable metal cars and trucks from the 50’s with lots of movings parts. Many a Structo vehicle had a hood that would open to reveal an engine, something that mere Tonkas couldn’t do.

As the 50’s turned into the 60’s, Structo toys continued to compete with Tonka. They also sold very well. A backyard dig site would typically be populated by Tonkas, Structos, and perhaps a few Nylints and Buddy-L’s. The sturdy vehicles would be passed down from generation to generation, and many still survive today, even quite a few from the 20’s.

Structo continued to do well throughout the 60’s and into the 70’s. In 1974, they were acquired by Ertl, who still exists and is indeed a kingpin among miniature vehicle manufacturers. The Racing Champions line is an Ertl subsidiary. I have actually purchased Racing Champions cars as investments for my own kids.

But sadly, you can’t walk into the Western Auto store any more and buy Structo trucks. The brand is long gone, except for the memories of Boomer kids, as well as those of their surviving parents.