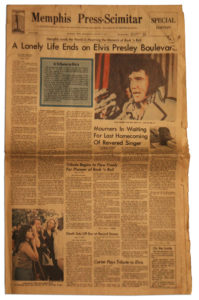 I had just walked into the house after playing a round of golf. Mom hollered “Elvis is dead!”

There was no need to ask Elvis who. There was only one Elvis back then, and many feel the name should be retired, like Jackie Robinson’s number.

Elvis Aron Presley was born in Tupelo, Mississippi on January 8, 1935. While no Boomer himself, there’s no estimating just how great an effect he had on our generation. More’s the pity he was robbed of the chance to completely own the music business, instead being coerced by his controlling manager into appearing in a long string of cheesy movies through the 60’s, wasting time that should have been spent in the recording studio.

Elvis exploded onto the scene with hit singles released by legendary Sun Records. His career was launched into overdrive by triumphant (and controversial for the time) appearances on Ed Sullivan. He truly was rock and roll to a generation of Boomers a bit older than me.

Then, Uncle Sam called. On December 20, 1957, Elvis opened his mail to find a draft notice. We didn’t know it then, but the King of Rock and Roll would never be the same.

Serving in Germany, Elvis discovered amphetamines. They would keep you going when you were short of sleep. Elvis was an instant fan, and they accompanied him right to the grave, along with a host of other prescription drugs obtained for him by Colonel Parker.

But it wasn’t the drugs that took Elvis’s brilliant edge off that was so cutting from 1955-1957. It was his greedy manager, who saw more cash flow from Elvis the actor instead of Elvis the rocker. So he convinced Presley it was in his best interests (it was certainly in Parker’s) to back off of cutting records and spend more time making movies. Songs like Heartbreak Hotel, Hound Dog, and Love Me Tender will endure for the ages. Movies like Charro!, Tickle Me, and Kid Galahad won’t.

But in 1968, Elvis, dissatisfied about his downhill career slide, signed a deal with NBC to produce a television show called simply Elvis. It later came to be known as the ’68 Comeback Special. The King, whose record sales and movie receipts were way down from previous highs, wowed TV audiences with a smash hit show that was also artistically praised by the critics. Elvis was back.

He went on the road, playing all over the country, but performed numerous times in Las Vegas. His later career was marked by his white outfit onstage at the big Vegas casinos. As Neil Young sang in He Was the King, the blue-haired ladies screamed.

But the whole time, he was on a veritable cocktail of uppers, downers, and everything in between that was available at the local pharmacy. Colonel Parker might have slowed down the flow of drugs if he had envisioned the early death of his cash cow, but he kept Elvis richly supplied with everything the King asked for.

I wish I had known Elvis the rocker. Jailhouse Rock, one of his few cinematic jewels, gives me an idea of how this man turned the world of music upside down. So does footage of the Sullivan appearances. But, sadly, the Elvis I remember was the one who sang those bad songs in those bad movies, and who died at the age of 42 looking like he was twice that old.

I blame a sponging, dominating, self-centered agent, and Elvis’s poor judgment in sticking with him.