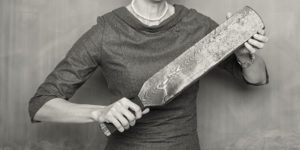 At the risk of inciting the wrath of the PC police, today’s memory is about the paddle that hung by the chalkboard, and the discipline it inspired.

I was a class clown. No, let me rephrase that. I was THE class clown. Ergo, I was quite familiar with that wooden implement that usually had holes drilled in it “to lower wind resistance” one teacher told me. It would also be sinisterly marked with bold colors to get your attention while it hung from the wall right where you could see it.

Occasionally, the teacher would use it. More often, getting a student’s attention and merely pointing to it would cause a potential disturbance-creator to settle down quickly.

The paddle accompanied my school days from first grade through my senior year in high school. And yes, I was familiar with the procedure involved in getting yourself a needed dose of corporal punishment.

My first grade teacher, Mrs. Cottam, would simply bend you over your desk and give you a single swat. She knew just how much oomph to put into it to gently cause a six-year-old to see the error of his ways. I only got one paddling from her that I recall. That was all I needed. 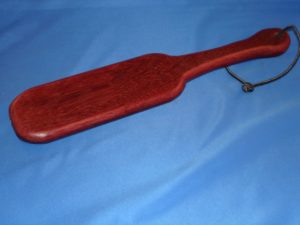 As I grew older, my propensity to entertain others made me a semi-regular recipient of “learning sessions.” By junior high, the procedure was modified a bit. You would be marched out to the hall and told to wait. The teacher would go get another to act as a witness, then would make you grab your ankles.

Different teachers had different pain-producing-levels. Students would spread the word among themselves as to whose paddlings were walks in the park and whose classes you DIDN’T DARE act up in.

My biggest shock was from Mr. Smith, my algebra teacher. He was a little guy who was very methodical in his educating, drawing lots of formulas on the board and teaching straight out of the book. He was also seemingly oblivious to the acting up that went on non-stop in his class. Of course, that made fertile soil for yours truly to plant my wild oats of clowning.

Well, one day, out of the blue, I guess he decided he’d had enough. So he marched a fellow goof and myself to the office. We both chuckled along the way. The whole school knew that the principal didn’t have much of a backswing.

To our surprise, diminutive Mr. Smith wielded the paddle. This was going to be even easier! I volunteered to go first. I bent over the desk. Mr. Smith proceeded to smack my rear so hard that my face hit wood!

I was stunned. I don’t think I even felt the next one. When I looked at my partner in crime, he was already crying.

When word got around of the sheer force behind Mr. Smith’s paddle, his class suddenly became quite well-behaved.

Today, of course, paddling is evil, monstrous, horrible, and, most important of all, Politically Incorrect. One website I found has a table showing the number of students who have been “battered,” not paddled, over the years. I don’t know why they’re worried about it. It’s been banned in every school district that I know of.

But we Boomer kids remember when our teachers had paddles, and weren’t afraid to use them.