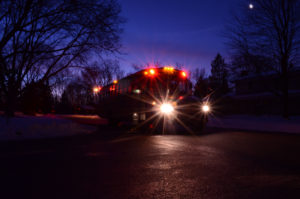 The earlier Daylight Savings Time we experienced this year may have brought back memories of the year you went to school in the dark. A Mideast war had a domino effect that caused that particular memory for us one year. Here’s how it went down:

On October 6, 1973, Egypt and Syria crossed cease-fire lines and attacked Israeli-held land in the Golan Heights which it had obtained during the 1967 Six-Day War. This most recent conflict became known as the Yom Kippur War. When you have that many wars, you have to keep them straight.

Anyhow, Israel fought back and reclaimed its lands, and it was all over by October 26. Only it wasn’t over. For the United States and any other pro-Israel nations, it was just beginning.

Those lovable lugs who form the coalition known as OPEC decided we all needed a spanking. So on October 17, while the little Yom Kippur thing was still going on, they announced that any nation that supported Israel would thereby be cut off from receiving any more of their oil. 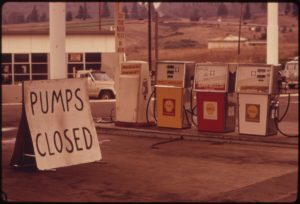 In so doing, they managed to accomplish several things. They ended up doubling the price of oil. They caused a recession in the US. And they caused inflation to surge dramatically.

In many areas, long lines formed at the gas pumps. Many stations ran out of gas altogether. In southern California, they had odd-even days. You could only buy gas on the day that matched your license plate number. Vanity plate owners were odd or even based on how many letters were used.

In my area of northwest Arkansas, we were small enough in population that I don’t remember lines of more than two or three cars. I don’t recall any stations running out of gas, either. But the prices nearly tripled. It took a while for gas to go higher than a dollar a gallon, but eighty cents was still a shock when you were used to paying around thirty.

Laws were passed to deal with the crisis. They were both stupid. One dropped the nationwide speed limit to 55 miles per hour. It basically turned a predominantly law-abiding nation into one filled with speeders who grew used to violating that law, and would likely grow used to violating others. It took 21 years before it was finally done away with. 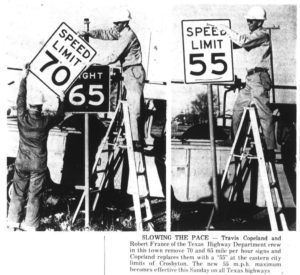 The other silly law was year-round Daylight Savings Time.

In the northern United States, daylight wouldn’t arrive until well after 8:00 AM. That meant kids were going to school (walking, in many cases) in pitch black darkness. Did nobody in Congress or the Senate see a problem here?

We spent parts of two winters going to school in the dark. Then in 1975, the law was repealed. We were back to DST beginning in April and ending in October.

Interestingly, FDR instituted year-round DST in 1942 for the duration of the war. Complaints were fewer then, perhaps because the adjustment was called War Time, and patriotic fervor overrode any concerns for kids in the dark.

But there was no war in 1974, only a harried population already dealing with gas lines and closed stations. The last thing we needed was our kids going to school in danger of getting run over or abducted in the inky darkness.

The Embargo taught us that we shouldn’t depend on imported oil, because its flow could be affected by things like idealogical beliefs. For a while, we learned and got smarter. The huge gas-guzzling cars Detroit had been selling us for years began to get smaller and stingier with gas. Alternative power sources were explored. Fuel consumption went down.

Alas, today, it’s back up. We think we have to have four-wheel-drive to get around. Cars are getting bigger, although their overall mileage continues to improve. And while the hybrid vehicle is becoming more commonplace, research into alternative energy sources has slipped badly. We’re importing more oil than ever.

But at least our grandkids aren’t going to school in the dark.