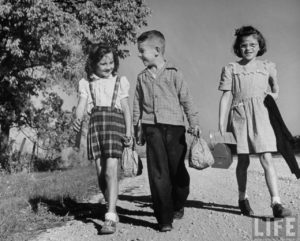 Is it just me, or are very few kids walking to school these days compared to when we Boomers grew up?

The school situation in Bentonville, Arkansas has been whacked at least since my kids were in school. We’ve had a population explosion here for thirty years and perennially have too few seats in the classrooms. Not only that, my kids weren’t allowed to attend the elementary school close to my house. Instead, they had to ride a bus to one several miles away.

The truth be told, we probably would not have let them walk to school anyway, at least until they were older. Too many sleazeballs out there looking to prey on kids these days.

But in my hometown of Miami, Oklahoma so many years ago, the only kids who rode schoolbuses were the ones who lived in rural areas. 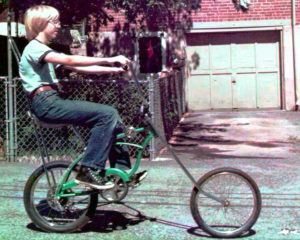 My own walk to school was about a mile. I would traverse alleys to get there, making friends with the neighborhood dogs in the process. They would eagerly greet me as I walked by at precisely the same time every morning.

In fact, if I close my eyes, I can envision nearly every step of the daily trek. Sometimes my slightly-better-than-normal memory scares me.

I also rode my bike to school a lot, a Sting Ray knockoff. The bike rack in front of Nichols School would be full of colorful banana-seaters, as well as a few odd traditional bikes ridden by the less fortunate.

Rain was a year-round threat in the midsouth. So sometimes the bike would have to go in the trunk for a ride home with mom. Of course, the trunk on a Fury III was big enough for three or four bikes.

Mom was a schoolteacher herself, and had to be at the other grade school in town early. So when the weather was bad in the mornings (or when I just wanted a break from walking), I would ride with the kids who lived across the street. I remember they had a big Buick LeSabre whose name I had a hard time pronouncing. It went against all of my training in phonics.

In all, I walked to kindergarten and school for four years before our move to rural southwest Missouri. But I have many, many memories of mini-adventures on the way while walking to and from Nichols Elementary so many years ago.