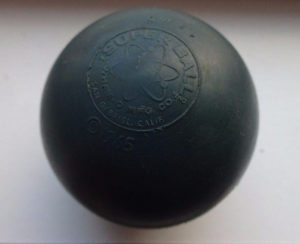 Wham-O Toys were a big deal in the 60’s. One of their products came out in 1965, a big year for toys. It was a ball made of highly compressed rubber. That gave it amazing bouncing ability. In fact, as the ad said, you could bounce it over a house!

And I did, too. Once I convinced my parents to shell out the 98 cents necessary for its purchase, the first thing I did was bounce it over the house. What a rush!

The SuperBall traces its origin to a California chemist named Norman Stingley. He compressed rubber under 3500 lbs. of pressure to create a sphere that bounced like no ball had ever bounced before. Realizing its potential as a craze, he offered it to his employer, the Bettis Rubber Company of Whittier. The rubber was not quite ready for prime time (it would fall apart within minutes of play), and they declined any interest in it.

Wham-O worked with Stingley to create a more durable rubber. By mid 1965, the SuperBall was released, along with an avalanche of TV commercials. Wham-O scored yet another instant hit, and more than seven million SuperBalls were sold by year’s end.

The ball, besides having tremendous bouncing power, also has a mighty grab. You could drop it on a hard floor with some english and it would hop back and forth, reversing its direction each time. We also threw them back and forth the length of a city block.

Like many toy crazes, the mighty rush to buy them soon died down, but the toy itself survives to this day. Wham-O still cranks out SuperBalls, as do many imitators. But in the mid 1960’s, the entire country was caught up in SuperBall fever.

By the way, as I penned this article, a 1965 SuperBall in its original packaging was up to $31.00 with three days left on its eBay auction. So if you have an original, put it in a safe place!