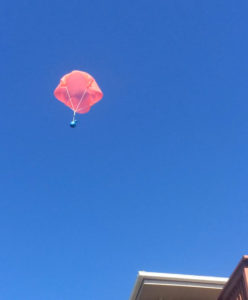 Kids have great imaginations. And some of us lucky ones keep it throughout our whole lives. I know I couldn’t crank out six new memories a week without lots of imagination!

But the cost of toys has dropped, and their quantity has grown in the average home compared to the 60’s. And I fear that kids today no longer feel motivated to devise their own toys out of mundane objects.

I remember being entertained for hours by throwing my hand-made parachute up in the air and watching it float back to earth. All it took was a handkerchief out of dad’s drawer, a rock, and some string. Oh, and also some imagination.

The paper airplane is another example. By the time I was twelve years old, I could make a half-dozen different styles of paper airplanes. I’m not sure today’s average twelve-year-old could duplicate that feat.

It was pretty cool taking a sheet of paper and skillfully transforming it into a flying machine. I learned how to make a flat airplane that would take great swoops up and down as it made its way to earth after a good hard throw. My friends and myself would sometimes just make a mess of paper airplanes and head out to the yard and toss them for hours.

Pipe cleaners were another source of entertainment. I’m not sure anyone ever actually cleaned pipes with them, but mom would sometimes purchase a pack of them at Woolworth’s and thereby provide me with more hours of entertainment creating strange looking creatures out of the wiry, bendable stuff.

You could also create toys out of scrap lumber. I remember building some pretty impressive structures just by stacking short pieces of 2×4’s and 2/6’s. There was a cabinet shop in the neighborhood whose trash cans were frequently raided by kids looking for pieces of wood that would be transformed into houses, skyscrapers, and other miniature engineering projects.

Empty thread spools were also a blast to play with. You could stack them as high as possible without tumbling down. You could use them as mines or bombs for your G.I. Joe to avoid. You could set them up to make an obstacle course for your Tonka cars to drive through.

I could go on and on, but I think there may be a second column’s worth of making toys out of non-toys.

In the meantime, do your grandkids a favor. Teach them how to make a handkerchief parachute.