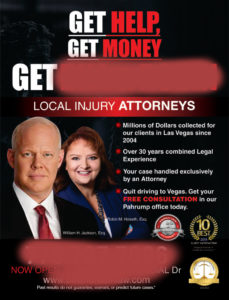 Oh, lord. I’m opening myself up to cease-and-desist orders and libel lawsuits here.

Well, I have freedom of speech. So here goes…

According to the Georgetown Journal of Legal ethics, Summer 2005 issue, in an article by Emily Olsen, this summed up the stance of the American Bar Association once upon a time:

In 1908, the American Bar Association (“ABA”) established and promulgated its first ethics code, known as the Canons of Professional Ethics, which condemned all advertisement and solicitation by lawyers. Academics at the turn of the century generally viewed advertising as not appropriate for the legal profession. They believed that only tricksters used legal advertising in order to improve their reputation and an honest lawyer worked to earn his good name. “In the case of the lawyer, advertising of one’s own willingness to be trusted as a man of unselfish devotion frosts the rose before it has a chance to bloom.”

Wow, shades of the NRA (and I am NOT anti-gun, before anyone’s hackles get raised) coming out against machine guns and sawed-off shotguns in the hands of the general populace in the 1930’s. Once upon a time, common sense was much more common.

In the mid 1970’s, the state of Arizona had the good sense to file suit against a lawfirm that, in its view, was crossing the line with its advertising.

In 1977, the US Supreme Court sided against Arizona. On that day, floodgates were opened which led to massive full-page-Yellow-Pages ads promising you wealth and justice if only you will hire the mentioned legal firm to sue the crap out of whomever you felt like wronged you.

Perhaps a less-than-contemptible idea in philosophy, in practice, it has transformed a society whose individuals once by and large blamed themselves for their mistakes to lay the blame on the state, the nation, their doctor, or perhaps McDonald’s or another wealthy corporation who can darned sure spare the cash.

The same article that I quoted from outlines a comprehensive list of rules that lawyers must now follow when advertising their trade.

Sadly, that list doesn’t bar bad taste. Thus, we are bombarded by things like garish full-page ads in phones books and magazines promising large payoffs if the potential plaintiff who reads the blurb chooses to enlist the firm (no win-no fee!!!) to go after the real or imagined injurer with barrels-a-blazing.

And society has paid for the litigation free-for-all that widespread lawyer advertising has contributed to.

Now in all fairness, I’m a big John Grisham fan. Grisham himself is a licensed attorney who instead uses his literary talents to make a nice living. And yes, I’m familiar with Grisham stories like The Rainmaker, in which a corrupt insurance agency has to be sued to cause it to see the error of its ways.

But if I recall, none of the plaintiffs in the book found Rudy Baylor in a large, intrusive Yellow Pages ad or on a massive billboard or on an often-rerun television commercial.

And yes, corporate corruption exists that victims must use legal means to fight against.

But if you find it necessary to write down a 1-800 phone number from an afternoon ad in order to seek justice, then you have issues of your own.

You see, lawyers have thrived on word-of-mouth referrals since time immemorial. I have had a day or two in court, and each time, my lawyer was someone who was recommended by a trusted friend or by a previously-utilized attorney who was unable to handle the particular case.

When we were growing up, a lawyer’s advertisement was his shingle, or perhaps a discreet bold-type phone listing. And, if I recall, medical bills were reasonable enough to pay on the spot upon dismissal from the hospital. McDonald’s didn’t have to put large warnings on their coffee cups designed to let the particularly low-witted know that the contents therein were hot.

But nowadays, if the average Joe slips on the ice, or trips and injure his ankle, or (horrors!) spills hot coffee on himself, instead of warning himself to be more careful next time, he frequently finds himself reciting an 800-number that he’s heard so many times on TV ads that he has it memorized. And that is one of the many differences between the world we grew up in and the one that we now inhabit.

BTW, for a defense of the infamous McDonald’s decision that is completely self-unaware of how ironically funny it is, click here.