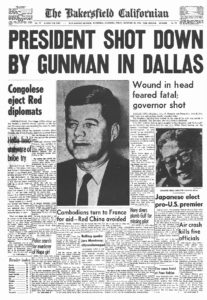 Watching Tom Brokaw’s 1968 on the History Channel, I had a memory spring back to mind that was buried too deeply for me to dig up without a little help.

After the unspeakable assassinations of that year, I, and many other kids, assumed that leaders were destined to die violent deaths.

My mother’s shock of JFK’s death was still fresh in my mind on April 4, 1968, when the local programming was interrupted to announce that Dr. Martin Luther King had been gunned down in Memphis. While the former caused her to be hysterical, her reaction to King’s death was more controlled.

It had nothing to do with racism. My mother was born in the Texas Hill Country to hard-working parents. My grandfather, who lost a lung to WW1 mustard gas, ran his own gas station. My grandmother was a schoolteacher. 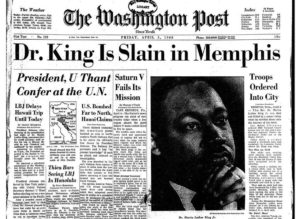 My grandmother was also a paradox. The world she grew up in taught her to use the dreaded “n word” with no embarrassment whatsoever. Yet, the way she lived her life proved that she had no real animosity against any ethnic groups.

I thought it was hilarious that the taboo word would fly out of her mouth repeatedly in the course of normal conversation. But if my mother ever heard ME use it, I was beaten as hard as if I had cussed.

No, my mother’s resigned reaction to King’s death was because she had seen it coming. Many, many great men had died in the fight for civil rights, and she, and many other adults, knew that some racist peckerwood would get the unquestioned leader of the movement sooner or later. 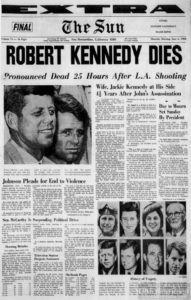 But we kids weren’t so in tune to the events of the time. All we knew was that another famous leader had been gunned down.

The angst became heavier on June 8 of that year. After giving a speech in Los Angeles, and apparently heading for a Presidential nomination, Robert Kennedy was gunned down by some Palestinian nutcase who had an issue with Bobby’s stance towards Israel.

That did it for me. As Hubert Humphrey squared off against Richard Nixon, I wondered who would be killing them. I also wondered why anyone would even want a job that had a certain violent death sentence attached to it.

It seems naive, of course, but it was a real part of my world. According to Brokaw’s 1968, I wasn’t the only one, either. Teachers reported that entire elementary school classes held the same belief.

I really don’t remember if my own classmates felt that same way. But I would be quite interested in finding out how many of you Boomer readers once thought that all leaders were destined to be gunned down.