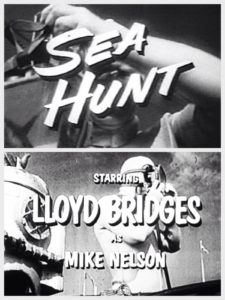 The routine was set in stone. I would get out of school at 3:30. By the time I got home, I was in front of the TV in plenty of time to watch Sea Hunt. And watch it I did, rerun after rerun.

There was something compelling about a show that was largely filmed underwater. Even now, I can’t resist series like Blue Planet. But in 1966, before Jacques Cousteau’s specials were around, we got our underwater fix by watching Mike Nelson getting into and out of various fixes.

The show, syndicated from the start, was filmed from 1958 to 1961. It continued to be syndicated throughout the mid-to-late 60’s.

Lloyd Bridges was an environmentalist who made a plea to protect the world’s oceans at the end of every episode. In fact, he left the show because the producers intended to make plots more about getting bad guys and less about environmental issues.

What I remember is that Nelson was always getting his air lines cut. That’s bad news when you’re down a hundred feet. I also remember that divers (never Nelson, who knew better) were constantly getting the bends from surfacing too quickly.

Another episode I recall showed a torn flipper floating in the water from a diver who was eaten by, of all things, a killer whale! I’m surprised that Bridges would let that situation sneak into a plot.

We used to have a great time imitating Nelson as we “swam” around the schoolyard at recess.

The show also served as a career springboard for guest stars like Leonard Nimoy, Larry Hagman, Jack Nicholson, and of course Bridges sons Beau and Jeff.

Here’s to Lloyd Bridges, who entertained and made a young generation environmentally aware at the same time.