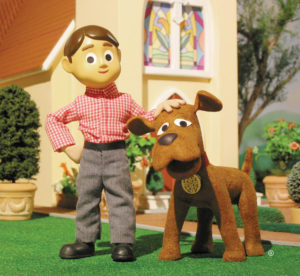 Those ominous words were regularly coming out of our black and white TV on Sunday mornings. That was the despairing sound of Goliath, world’s wisest claymation dog, who was helplessly observing Davey, world’s most naive claymation boy, ignore his sage advice.

Davey and Goliath episodes were produced by the Lutheran Church, and were widely syndicated from 1962 throughout the rest of the decade. Stations frequently showed them on Sunday mornings as spiritual guidance for little kids who didn’t make it to church that day.

However, they weren’t overly preachy, as I recall. They would concentrate on being a good person, with Davey’s screwups being the basis for instruction given by wise Mr. Hansen at the end of the brief episode.

I really got a kick out of the graphic above (thanks to Davey and Goliath’s official site). It shows the whole family sitting in a living room that is classic 1965. Paneled walls, low-set wood coffee table, landscape print on the wall. That’s what my house looked like.

Goliath was a physical manifestation of the conscience that we all have talking in our ear, but frequently ignore. And when we ignore it, it’s up to a figurative Mr. Hansen to bail us out, as well as sit down with us afterwards and gently tell us the error of our ways.

There was an episode of The Simpsons when Homer rang Ned Flanders’ doorbell, and it played the familiar theme from Davey and Goliath. Good stuff.