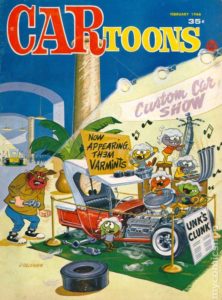 CARtoons was a mixture of comics and captioned photography. The comics included cars with outrageous hood scoops, massive engines, and gargantuan tires. The photos often featured clueless cops. It was all irresistible to a seven-year-old kid.

CARtoons got its start the same year that Barbie and I did, 1959. It was the creation of Pete Millar and Carl Kohler. Millar was an artist and a drag racer. Together, the duo produced what became a memory for Boomer youths of the 60’s.

The magazine came out every other month. Sometimes, it would come out eight times a year. It was sort of an informal situation. But its fans were many, and, well, fanatical.

In 1964, Unk and them varmints made their debut. They were on practically every cover until the magazine received a 1975 rework. Those blasted varmints were always losing Unk’s tools and such.

The format change meant the end of Unk, but was the start of iron-ons that were included. Many a 70’s t-shirt was decorated with hot rod art thanks to CARtoons.

The magazine survived until its disappearance in 1991. (2019 update: it’s back! https://cartoonsmag.com/)

CARtoons fans are still out there, though. For instance, the magazine has a Facebook page. There is also a website which has lots of old covers that will bring back memories.

So here’s a fond tip of the hat to CARtoons, a magazine which made many of us car lovers before we were old enough to drive.