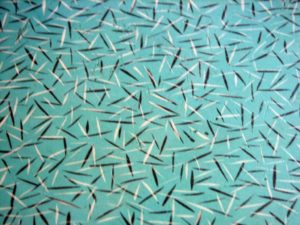 The pattern to the right was a familiar one to you if you were a visitor of malt shops and hamburger joints in the 1960’s. It’s known as VirrVarr, if you were wondering (probably not). It was one of Formica’s biggest sellers of the 50’s and 60’s, and was installed on the tabletops and countertops of eateries all over the world.

Formica was patented in 1913. The story, according to formica.com, is thus:

A young engineer had an idea that was pretty straightforward: take fabric, coat it with resin while it winds on a spindle into the shape of a tube, slit the tube lengthwise, unroll it, press it flat and then cure it. The result was a laminated plastic material that was tough, light and an excellent electrical insulator. It was easy to see the commercial potential of this new material.

The initial “commercial potential” was to replace the natural mineral mica as an electrical insulator. Ergo, “for mica.”

Formica eventually became the state-of-the-art inexpensive countertop material for diners and such. When you walked into a diner, your eyes were enthralled to see a wide variety of contrasts, from the black and white floor tiles (which cover many of the floors of our retro-themed home) to the chrome on the barstools, chairs, and counter trim, to the shiny Formica finish on the eating surfaces. 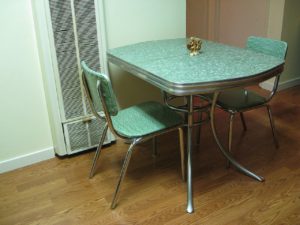 We had yellow Formica on our countertops at home. I’m guessing that it was installed when the house was built in the early 50’s, because dad did quite a bit of work on the house, replacing carpeting, nailing up paneling, installed a swamp cooler, and the like, but I don’t recall the kitchen ever getting any work.

It would be pretty ugly to look at today, but it was as comfortable as a well-broken-in shoe when I was a kid.

Formica was durable, but there were two things it wouldn’t stand up to. One was sharp knives. If you ever cut anything on your kitchen countertop, it would leave a dark, ugly gash. That would incite the wrath of mom, of course. The other element Formica was very pervious to (that’s the opposite of impervious, right?) was a burning cigarette, a very common heat source in those days. It was not at all unusual to see ugly cigarette burns branded into otherwise scar-free earth toned Formica.

The Formica corporation has listened to the public, which has clamored for a return of the classic styles we remember from our youth. So you can build yourself a retro table or bar topped with the ever-stylish VirrVarr. All you need is Elvis on the jukebox and a mug full of A&W root beer, and you can be a kid again.