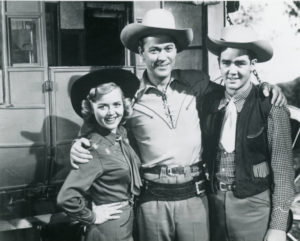 As I have repeatedly stated, I feel like 1959 was the best possible year in which to be born. However, I was born too late to enjoy a television show that had a truly rabid following among Boomer kids who were around to watch it from 1951-1959.

The show was Sky King, and it inspired a significant percentage of its viewers to pursue careers in aviation, or at least to obtain the status of private pilots.

The show starred Kirby Grant as the star character, Sky King. Gloria Winters played his beautiful niece, Penny King, no slouch as a pilot herself.

The show’s premise was simple, as were all of those of the era: Sky King would save lives, track down criminals, or help out the downtrodden of various flavors within a thirty minute slot every Saturday morning.

The show was a success on radio, as were so many of the TV shows from the 50’s. It originally aired on Sunday afternoons, but was rerun on Saturday mornings, and eventually landed there permanently. 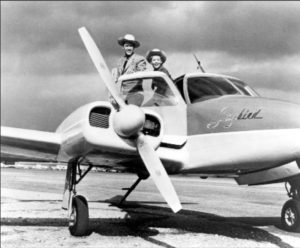 My oldest brother was a big fan, and, largely because of this TV show, landed a career in aviation himself. He flew C-130’s during the Vietnam war, and flew jets for Fed Ex until his retirement.

It would be interesting to know how many other professional pilots out there were also Sky King fans.

Skyler King flew two planes during the course of the series, both named “Songbird.” The first was a Cessna T-50 “Bamboo Bomber.” It was a wood-and-fabric classic beauty which was designed for training WWII pilots. The second was a Cessna 310B, a state-of-the-art twin engine plane first produced in 1953. Aerial filming was done from another 310B, both to match the flying characteristics of the primary plane, and also to provide a backup aircraft for ground and low-level flying scenes.

Sky King lived on a ranch in Arizona with a landing strip that rolled right up to his spacious house. Storylines were kept simple. In fact, many have said you could have substituted horses and cowboys for planes and pilots. But there’s certainly nothing wrong with simplicity.

The show was extreme high-tech for the Eisenhower era. Bad guys were foiled with the help of two-way radio and expert piloting. It’s not difficult to see how kids watching on little black and white TV screens would be hooked.

Sky King himself was an old-fashioned straight shooter who would take responsibility for his occasional mistakes by explaining his humanness to Penny. She would understand, of course, and all would be well by the end of the episode.

Sky flew his last flight in March, 1959. I was born a few months later. But even though I never saw an episode, I was indirectly affected by riding on countless airliners flown by fans of the series who decided that they would be pilots when they grew up.

Here’s a brief clip of the show opening.