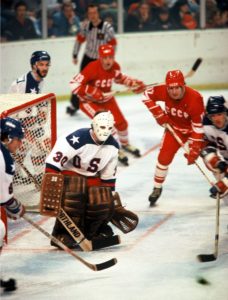 There have been some truly memorable sports calls over the years. I have sweet memories of Harry Caray hollering “It could be, it could be, it is! A home run!” during Cardinal games of the 1960’s. Russ Hodges, who might have otherwise been remembered as a competent but forgettable broadcaster of the New York Giants, cemented his place in history with his breathless 1951 call repeating “THE GIANTS WIN THE PENNANT!” over and over again.

But Sports Illustrated, which has long been the standard by which sports journalism’s excellence is judged, ranked Al Michaels’ “Do you believe in miracles?” call of the 1980 US Olympic hockey team’s victory over Russia as the greatest individual call of the 20th century.

The call was a perfect description of a perfect game, when an entire nation was ecstatic at the same time over a most unlikely victory.

I remember really getting into the Olympics that winter long before the actual event. I purchased a preview magazine that outlined the US’s best chances at medals. The hockey team, according to the prognosticators, would likely be a disappointment.

The team, composed of college players and other amateurs, looked pretty shaky. You had never heard of any of these guys, although many had starred for their various teams that you’d also never heard of. The US team was seeded seventh out of twelve. 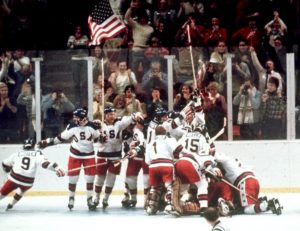 The mighty Russians were expected to glide their way to gold. Their players were payed to play, only deviously around the Olympics’ then-rigid rules of amateur athletes only. They played in a well-organized league and had state-of-the-art training facilities. Today’s proliferation of successful Russian NHL players testifies to the deep pool of talent that the nation has long possessed.

The US was particularly angry with Russia over their invasion of Afghanistan. President Carter would go so far as to boycott the summer games in Moscow. So beating them in hockey was a sweet dream that would probably never come true. The fact that Russia had shellacked the US 10-3 in a previous exhibition game that month of February made defeating the Commies look impossible.

The US began with a 2-2 tie against a superior Swedish team. Hmm. That was followed by a most unlikely 7-3 victory against Czechoslovakia, whose government also took “very good care” of their “amateur” players. This was getting interesting, indeed.

Americans began tuning in in earnest as this upstart team added victories over Romania, Norway, and a come-from-behind nail biter against Germany to advance to the Medal Round. 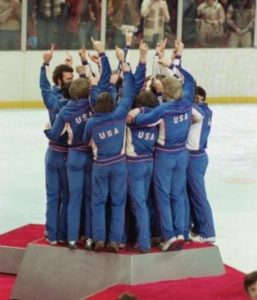 Russia, meanwhile, was mowing down its opposition handily. They were undefeated heading into the Medal Round, as expected. Sweden and Finland made up the rest of the finalists.

The US’s next game would be against the Russians, and not many television sets were on any other channel but local ABC affiliates the night of February 22, 1980. The game had actually been played previously that afternoon, but in the days before the internet, it was easy to keep the results a secret. So most of us watched the contest as if it was a live affair.

The US was soon down 1-0, but the crowd and the team weren’t worried. They had come from behind before. Soon it was tied, and then Russia was back up 2-1. The US tied it up again just as the first period was expiring.

The Russians put their backup goalie in for the second period. They scored on a power play to go up 3-2. Again, no worries on the American side, as the crowd waved big flags and chanted “USA! USA!”

USA scored in the third to tie it again, then Mike Eruzione slipped one past the Russian goalie with 10 minutes left to give USA its first lead. The crowd was hysterical.

Goalie Jim Craig was relentlessly hammered with shot after shot, but his more and more miraculous saves just kept coming. Finally, the crowd counted down the last ten seconds, Al Michaels made his immortal call, and history was made.

They could have probably beaten the Montreal Canadiens the next night, but instead they just had to defeat Finland. No problem there, and the US had its second, but by far most celebrated, Gold Medals in hockey.

Thirteen of the twenty players played in the NHL, but none of them really starred. Oh well, who cared. They just had to settle for merely being immortal, at least in the minds of everyone who watched the game that Saturday night so long ago.