There are memories that transcend generations. Today’s I Remember JFK reminiscence is one such. Odds our our parents enjoyed the game of Monopoly before we Boomer kids ever came along. But we certainly enjoyed it ourselves, as have our children and grandchildren.

There are probably few households in America that don’t have a Monopoly set stashed in a closet somewhere. According to Hasbro, the current owner of the game, more that 750 million people have played Monopoly since it was patented in 1935. That makes it the most popular commercially sold board game in history.

Certainly, there are few Boomers out there who didn’t have a well-worn game, probably handed down, that would be set up for play while you and your friends would debate about who would be the banker, who would handle the real estate deeds, and, most importantly, who got to use the race car. 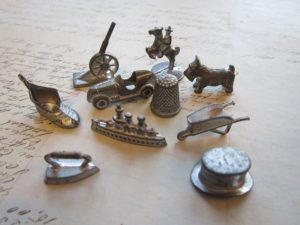 Monopoly was devised by an unemployed heater salesman by the name of Charles Darrow in 1932. The Great depression was raging, and Darrow was looking for a way to make a buck.

In 1904, Elizabeth Magie patented a game that proved to be mildly successful called The Landlord’s Game. It was actually a bit of a protest on her part to devise the game, as she was opposed to landlords getting wealthy at the expense of their repressed tenants.

Darrow had played The Landlord’s Game, a favorite of intellectuals, but saw a need for a less stern version of the same game for the general masses. So in 1932, he created Monopoly.

Originally consisting of a round, hand-decorated oilcloth board with hand-carved houses and hotels and powered with dime store play money, Monopoly became a fast seller in Philadelphia department stores. Darrow struggled to keep up with the demand, and began farming out some of the printing work.

By 1934, he approached Parker Brothers and Milton Bradley with the idea of them purchasing the game. They both pooh-poohed it, Parker Brothers citing 52 fundamental errors. They felt that the game was too complex for the average masses.​_

Perhaps they should have played The Landlord’s Game before meeting with Darrow.

Undaunted, Darrow began producing more compact versions of the game, and Philadelphia stores snatched them up. Seeing this, Parker Brothers reconsidered and purchased not only Monopoly, but also any lookalikes like The Landlord’s Game. And Darrow, of course, went from rags to riches.

The set I played with was 1950’s vintage. I remember the board being yellow. I soon learned that the strategy is buy, buy, buy. He who gets three properties of the same color has the power. But as the game winds down, deals can be made to spread the wealth around and keep the action going. According to Hasbro, who now own Parker Brothers, one game went on for 70 days!

So here’s to a big part of the memories of many generations: a friendly game of Monopoly.