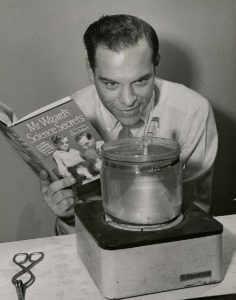 At presstime, the world has just heard of the death of Don Herbert, aka Mr. Wizard. He passed away on June 12, 2007, just a bit short of the age of 90. He had been fighting cancer.

Mr. Wizard was an amazing man who turned many generations of kids onto science. My oldest brother, 15 years my senior, and I were both enthralled by his original series, Watch Mr. Wizard. The show ran from 1951 to 1965, long enough to be a favorite of all of the Enderland boys. I just barely remember watching it, but I remember being thrilled by the amazing things you could do with items found around your house.

Herbert flew a B-24 in WWII, and came home to get into the radio business. Like many radio types, he moved naturally into the fledgling television industry. In 1950, he pitched the idea of a science show to advertisers. They weren’t impressed. Still believing he had a good idea, he turned the show over to producer Jules Power. 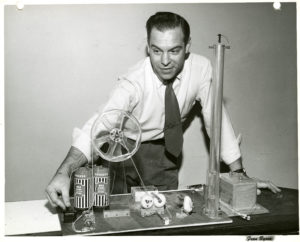 By the next year, he had landed a slot on NBC’s schedule, and the first episode of Watch Mr. Wizard went on the air.

The show featured Herbert and one or two boys who would watch in wonder and ask lots of questions as he taught them about everything from archaeology to zoology. But Herbert didn’t see any reason to exclude girls, and they began appearing the next year.

Herbert insisted on keeping his experiments simple enough so that kids at home could perform them. He generally spurned laboratory equipment in favor of jelly jars and the like. His goal was that kids learn something, and that they not be so intimidated by expensive lab equipment that they shy away from trying the experiments themselves.

Nickelodeon hired him for Mr. Wizard’s World, a three-times-a-week show that ran from 1983 to 1990. A whole new generation of youngsters were thus able to develop a love for science.

He was involved in other TV projects as well, and his is a familiar face to millions. There is no guess as to how many kids grew up to pursue careers in science as a result of Mr. Wizard. His legacy will live on in them, as well as in reruns, memories, and imitators.