Film animation has certainly had its ups and downs over the years. My all time favorite animated scene is when the clocks all strike the hour at once in Walt Disney’s Pinocchio. Man, those little wooden people moving around on their little tracks on the clocks, it was some amazing, hand-drawn stuff.

At the other end of the scale is my subject of today’s column: Scott McCloud, Space Angel.

Scott McCloud, and another popular kid’s cartoon called Clutch Cargo, used a technology called Syncro-Vox. It allowed a still image to show moving, REAL human lips. It was kind of strange, but compelling. And it still is when you see it used today.

It also allowed for some mega-cheap animations. After all, if those perfect human lips were moving so naturally, you could REALLY cut back on the number of frames you needed to hand-draw.

I was a little surprised to learn of the low-quality animations, comprised largely of cameras panning over static images, that comprised Scott McCloud, Space Angel. The reason I say that is because it was my absolutely favorite cartoon when I was five or six years old. 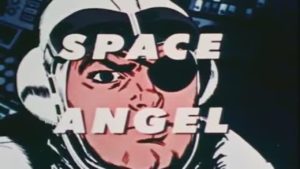 We had a local afternoon cartoon show on KOAM TV, channel 7 out of Pittsburg, Kansas. I don’t remember much about it except the fact that it only showed Scott McCloud and Clutch Cargo cartoons. Clutch was fun, but I was passionate about Scott McCloud.

You see, Scott traveled in the most perfect fictional space ship I ever saw. The Star Wars X-Wings? Pshaw! Scott could have easily kicked their butts with his ship, depicted above.

I must have drawn that ship at least 10,000 times doodling in class, right up to my senior year. In fact, if you were to ask me to quickly draw a ship right now, it would likely look pretty much like the Space Angel’s perfect ride.

I guess the powers that be as far as animation is concerned learned long ago that quality, at least on TV, doesn’t really matter. It was the storylines that Space Angel took that hooked young Ron Enderland. Hence, today we have smash hits like The Simpsons, King of the Hill, and others that use animation that pales when compared to that of Pinocchio, Snow White and the Seven Dwarfs, and other Disney classics. But they still rake in huge bucks.

But Scott McCloud and Clutch Cargo showed that you could hook youngsters, for life, in my case, with crappy animation, good writing, and slightly strange moving lips.