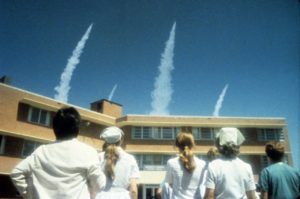 Most of the memories here are from my childhood. In 1983, when our generation was all grown up, this movie was shown on ABC TV. This was one of the last coups for network television, cable not quite having taken over yet. It was watched by 100 million people, the most-watched TV movie ever.

My brand new wife and I watched this on our TV in our first home in Amarillo, Texas. It changed the way we looked at the world, as it did for everyone else who watched it.

The movie opens with familiar news broadcasts from the Cold War era, troop buildups, rattling of sabers, etc. People pay little attention as they go on about their lives.

Eventually, the Soviets blockade West Berlin. This is construed as an act of war.

Things accelerate rapidly at that point, with the general public at last taking notice when they see missiles launching all around them.

That’s when it hits: if we’ve launched ours, then they have launched theirs.

All of those airborne missiles show why their area is a prime target: the Soviets want those missiles destroyed before they are launched. The fact that they are already in the air won’t stop them from bombing the area.

The movie showed life after a nuclear attack. The survivors were the unlucky ones.

It was impossible to watch The Day After and not feel deep emotion. Nuclear war with the Soviets was a real possibility in 1983. It was scary. By the end of the decade, the Berlin Wall was down. Communism fell in large part. Watching the movie recently on the SciFi Channel, my emotions had changed to relief.

Here’s to the Cold War not being around anymore.