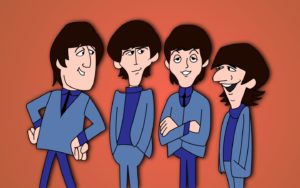 When the Beatles stepped off of that plane so many years ago, the entertainment industry changed permanently. The never-before-seen deluge of fan adoration was a bottomless well ready to be tapped. And no time was wasted in producing everything from little plastic guitars to Beatle-painted automobiles.

Little ABC, the perennial third-place network, cashed in on the Fab Four as well. They began showing The Beatles as a Saturday morning TV cartoon beginning on September 25, 1965.

And we Baby Boomer kids loved it.

The show maintained a basic premise: two adventures, and two songs, a kid’s version of Sing Along with Mitch, complete with a bouncing ball, as I recall.

I assumed it was really the Beatles doing the voiceovers when I was six. Of course, the bandmembers were far too busy conquering the musical world to do it. The actors who did the talking were Lance Percival (Paul and Ringo), and Paul Frees (John and George). What I remember (now keep in mind I haven’t seen the cartoon since Nixon was President) was Ringo’s distinctive laugh. Apparently, it was artistic license, as I never heard him laugh that way in real life interviews.

BTW, Frees provided the voice of Boris Badenov in the immortal Bullwinkle series.

Additionally, the Beatles’ Liverpudlian accents were Americanized a bit to make them more understandable to American kids, and this was not well received by Britons in general, the Fab Four in particular. The show was not shown in the UK until the 1970’s.

But I certainly remember the songs. They used some of the more obscure ones as well as the big hits. For instance, I remember belting out “Mr. Moonlight,” a definite non-best-seller, as that ball bounced endlessly across our black and white television. But I also remember “A Hard day’s Night.” However, I never did figure out what a hard day’s night meant. 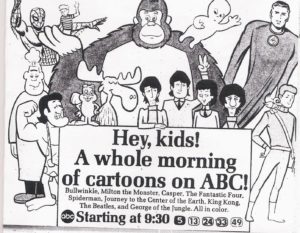 There was also a riff played before each new adventure that I remember well. It must have been played by hired help, as I have never seen it mentioned on the most comprehensive Beatle anthologies.

The Beatles appealed to a very wide range of demographic groups. Could you imagine a Rolling Stones cartoon? And many Big Band fans and Bobbysoxers found the Beatles’ unique power pop sound appealing, much to their offsprings’ disgust.

But there was something about the original Fab Four, with their dry, slightly long locks that absolutely hooked many of us Boomer children, and continues to appeal to us many years later.

IMH(adult)O, the Beatles’ just got better with time. But that’s not how I felt back then. I was disturbed that the Beatles of 1969 looked so hairy and unkempt. I wanted them to be the clean, cartoon images that were on the television show. And apparently I wasn’t the only kid who felt that way. The show’s ratings had dropped precipitously by then and the last ABC episode aired that year.

Some blame the show’s demise on a newfound superhero obsession, sparked by Batman. But there was just too much genius involved to keep the whole Beatlemania phenomenon going. The previously mentioned Rolling Stones have had their ups and downs over the years, but their legacy is sustained quality. The Beatles, on the other hand, after their unbelievable debut in the USA, could not possibly last more than a few brief years.

Neil Young said “it’s better to burn out than to fade away.” When a supernova-sized flame burns as brightly as did the initial spark of the Beatles, that may well be true.