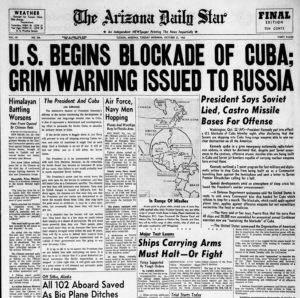 Some things blissfully took place before I had a chance to be terrified by them.

As a kid, I was plagued by worry. I’ve gotten over it since then, perhaps to an excessive degree, but back then, it didn’t take much to fill me with fear. And if I’d been a bit more aware when I was two years old, I’d have been up all night, just like much of the rest of the world was in 1962.

It all started on January 1, 1959. President Manuel Batista fled Cuba, leaving it in the hands of Fidel Castro and his revolutionary forces. Despite the fact that Batista was about as crooked a character as was around at the time, the US took it as a personal insult that communism had taken hold just 90 miles from its borders. The fact that lands and corporations held by US entities were nationalized by the Cuban government certainly didn’t help the mood, either.

Premier Nikita Kruschev was delighted, though. The outspoken, emotional head of the Soviet Union was another burr under the US’s saddle. The USSR had been flexing their muscles throughout the post WWII years, and Ike was sick and tired of it. By the time JFK was elected in 1960, the US had made it clear that Soviet expansion would not continue without resistance from them.

The Russians were nervous. The US had enough ICBM’s to bomb their entire nation, but the Red Bear couldn’t strike back. They could pepper Europe, but most of the US mainland was out of their reach. Solution: put missiles within the borders of new ally Cuba.

That went over with Kennedy like the proverbial fart in the elevator. Thus began one of the scariest chapters in world history.

On October 14, 1962, a U-2 plane flying high over Cuba spotted indisputable evidence that Russian missiles were being placed on the island. Kennedy kept the discovery under his hat and met with advisors for a few days.

The decision was made to create a naval blockade around Cuba. On October 22, he went public with the news, and also announced that any missile launch from Cuba would be regraded as an attack on the US, and would be given an appropriate response. He further demanded that the existing missiles be dismantled, and that all offensive weapons be removed.

Strong words. They were met by equally strong words from Kruschev. In a letter to Kennedy, he wrote that the blockade amounted to “an act of aggression propelling humankind into the abyss of a world nuclear-missile war.”

Thus began a time when the civilized world was faced with the very, very real threat of nuclear annihilation. Schools stepped up their air raid drills, fathers restocked their bomb shelters, and some folks literally began living their lives like there was no tomorrow.

Looking back, you could certainly see that the Soviets had a point. The US had been deploying missiles in NATO countries. The Russians responded with similar actions in their own Warsaw Pact holdings, but the US itself was too distant a target to be in danger. Wouldn’t missiles in one of the USSR’s western hemisphere strongholds be fair play?

HELL NO was JFK’s response.

The public responded in a variety of ways. Fear, obviously, was the most common reaction, but some felt compelled to protest. Peaceful marches took place in various locations in the US calling for “negotiation, not annihilation.” And, of course, others were ready to let the nukes fly and see who would survive.

But Kennedy was adamant. The missiles had to go, or Cuba would continue to be embargoed. The ball was in Kruschev’s court.

One of the scariest things about the whole mess was Kruschev on the other end. He was a bombastic individual who once took his shoe off and beat on the desk in protest of an opposing speech in a UN General Assembly. He also told western ambassadors “”Whether you like it or not, history is on our side. We will dig you in.” No, he didn’t actually say “We will bury you,” but his meaning was clear.

Knowing that he had a red button he could push was stay-up-all-night worrisome.

Finally, on October 28, 1962, Kennedy, United Nations Secretary-General U Thant, and Kruschev reached an agreement. The Russians would withdraw from Cuba in exchange for the US declaring that they would never invade the island nation. Behind the scenes, the US would also disassemble a number of missiles that it had in Europe and Turkey.

Fifty years later, the US has kept their promise. Castro is still alive, but his son is calling the shots. Kruschev is gone, so is the USSR.

But we’re all still around, thanks to a blustery individual making a calm decision. Say what you want about Nikita Kruschev, he prevented a nuclear war that he very easily could have instead caused to be. And Kennedy’s ballsy stance kept the western hemisphere free of Soviet missiles, thus giving one fretful youngster one less thing to worry about.