Ah the simple, carefree days we enjoyed as kids, when we used the sun, our mom’s yelling out the front door that lunch was ready, or the school bells to tell time.

Our lives were unencumbered by small wrist-worn machines that constantly reminded us that we were late, or that we had something important (and not fun) coming up soon, or that whatever enjoyable activity we were engaged in at the moment was temporary, and sooner of later it would be time to move on to something less enjoyable.

Ergo, many of us received wristwatches while we were kids. And for many of us, that first wristwatch was a wind-up Timex.

For me, it was 1971, when I was eleven years old. I don’t recall exactly when I was able to use the positions of the big hand and the little hand to deduce the time, but I know that I was darned good at it by that age.

My dad handed me a Timex wind-up watch. I was spellbound. Suddenly, I was a man. I now had the ability to know, within a minute or so, what time it was, even if I was in the far reaches of our forty-acre place we lived on at the time.

Sadly, my life would never be the same. That’s because I was also suddenly aware of the need to be somewhere on time.

Why a Timex watch? Several reasons. For one, they were quite affordable. Low price was one of their strong selling points. They were also durable. The watches my dad handed me were always second-hand, generally discovered in a box full of stuff purchased at a farm auction. It was a rare Timex, indeed, that failed to start ticking once it received a fresh windup.

There was another good reason our thrifty Depression-surviving parents and grandparents appreciated the Timex watch.It helped us lick the Kaiser in WWI.

The Waterbury Clock Company had been producing a “Yankee” pocket watch since the turn of the century, but when our boys were sent overseas beginning in 1917, the government commissioned them to produce a miniaturized timepiece that would fit on the wrist of a busy soldier. Once the war was over, the doughboys brought the amazing new devices home, and everybody wanted one.

By the time the Depression hit, Waterbury wristwatches were a very common sight. As the dark economic times wore on, Waterbury introduced a line of watches and clocks bearing a brand-new cartoon character which had caught on in the movie houses: Mickey Mouse. Despite the tight purse strings imposed upon them, a generation of adults managed to purchase over two million Mickey Mouse watches and clocks for their children during the 30’s.

WWII saw the government once again calling upon the corporation to help. Now called the US Time Company, they manufactured watches, of course, but more importantly, thousands of fuses for artillery and bombs which would reliably detonate them at just the right instant for maximum effectiveness.

In 1950, US Time began producing a war-proven wristwatch with serious durability. They called the line Timex. According to the Timex Museum: 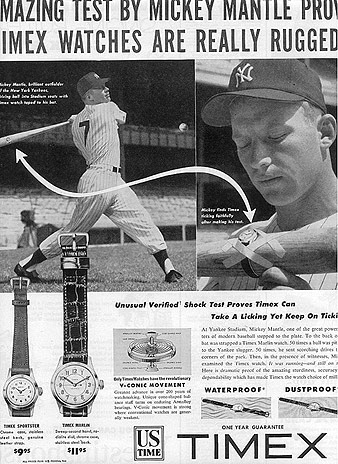 Print advertisements featured the new watch strapped to Mickey Mantle’s bat, frozen in an ice cube tray, spun for seven days in a vacuum cleaner, taped to a giant lobster’s claw, or wrapped around a turtle in a tank. Despite these and other extensive live torture tests, the Timex kept ticking. When John Cameron Swayze, the most authoritative newsman of his time, began extolling the Timex watch in live “torture test” commercials of the late 1950s, sales took off. Taped to the propeller of an outboard motor,tumbling over the Grand Coulee Dam, or held fist first by a diver leaping eighty-seven feet from the Acapulco cliffs, the plucky watch that “takes a licking and keeps on ticking®” quickly caught the American imagination. Viewers by the thousands wrote in with their suggestions for future torture tests, like the Air Force sergeant who offered to crash a plane while wearing a Timex. By the end of the 1950s, one out of every three watches bought in the U.S. was a Timex.

Thus, many a Timex was spotted on adult wrists. And as those adults upgraded to nicer Rolexes and such, the previously-owned Timexes would frequently be presented to juveniles who had recently mastered the art of timekeeping.

Timex is still ticking. As a matter of fact, they have plants in the US operating, producing timepieces. That’s a rarity nowadays.

They are also highly prized among collectors. One of the coolest features of a Timex watch is that you can tell the year of manufacturing. It’s right there, on the bottom of the dial, in tiny numbers.

Thus, many of us Boomers proudly sport Timexes by choice, not by economic necessity. Digital LCD watches can be had for pennies nowadays, keeping time within seconds a day. Yet, many of us choose to sport wind-up or auto-wind Timexes that date from previous decades which require weekly or even daily adjustments in order to stay accurate.

Hey, perhaps we’re slaves to time. But we can choose our master, and some of us prefer an old, familiar, durable, friendly face.