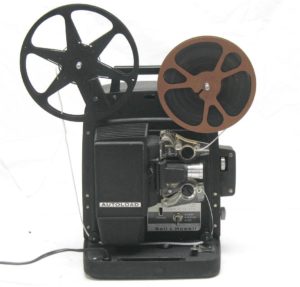 Our Boomer childhoods were quite well recorded when compared with those of our moms and dads. Growing up in the Depression, when you could either eat or take pictures, but not both, ensured that few photographs of our parents as cute kids would exist. And movies were simply unheard of.

But in the boom years after WWII, our parents could afford nice gadgets like they would never have dreamed of owning in their youth. And they were also very proud of their kids. So many of us were immortalized on 8mm film in our childhoods.

My father didn’t have a movie camera. But I had an uncle who had one, and I’m reasonably sure that he shot movies of me. It would be a thrill to see them, but I probably never will.

My wife’s parents had a movie camera as well, and also have movies of her running around as a toddler. She was a real cutie, BTW. 😉

They also have footage of the 1964 Winter Olympics. Cool stuff. 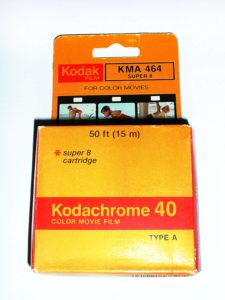 8mm film can trace its origin to 1932. Eastman Kodak released a movie system that used a 25 foot 16mm film roll. The film was exposed, then turned over and exposed again. When processed, it was split lengthwise to produce a 50 foot 8mm movie.

By 1965, the venerable 8mm format received a major overhaul with the development of Kodak’s Super 8 system. The sprocket holes were shrunk, providing 50% more frame size. Plus, Super 8 cameras had a built-in filter that allowed you to use one type of film for both indoor and outdoor movies. Previously, you had to buy daylight- or tungsten-balanced film to get the right colors.

Another innovation of most Super 8 cameras was a light meter. Amateur moviemakers now had a much better chance to create a perfectly-exposed film.

Oh, and Super 8 was now one continuous 8 mm roll of film. No more turning a cartridge over and shooting the other half of your movie.

The mid 60’s to the early 70’s was home movies’ heyday. Super 8 sold like hotcakes, and Boomer kids all over the country were being filmed in massive numbers.

That meant that many of us also grew up with the rest of the home movie equation: a noisy projector and a screen to present the fruition of our fathers’ cinematic efforts.

One of the first things we learned was how HOT that projector bulb would get! We would generally only touch the metal enclosure only ONCE. 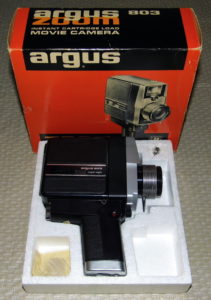 And of course, having company over meant getting everything out and forcing them to watch our movies, which we assumed was as much fun for them as it was for us.

Of course, the invention and eventual affordable price of the videotape recorder caused Super 8’s popularity to decline. This is particularly ironic considering that a Kodachrome movie of the 60’s that has been kept in moderate conditions is likely in pristine condition. However, twenty-year-old videotapes are frequently unwatchable due to tape deterioration. If you have videotapes you want preserved, you’d better get them digitized quickly.

8mm and Super 8 moviemaking has made a nice comeback, with vintage cameras in good condition available for reasonable prices on eBay and would-be cinematographers using the still widely obtainable film to make movies that have a lot of charm that digital recording lacks.

However, we kids of the Boomer generation can remember when home movies were cutting-edge technology, and how vacations were frequently accompanied by the familiar whir of a camera recording our fun times.