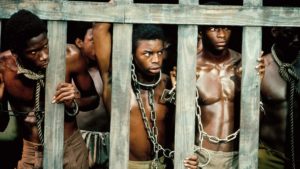 So what could television be capable of in 1977, anyway?

The one-eyed monster had gone from an expensive luxury for the wealthy thirty years earlier to a ubiquitous part of practically every American home. It captivated a huge portion of the nation’s population every night with fare that ranged from good to horrible.

But could the idiot box make a moral statement? Could it present history as viewed through the eyes of its oppressed, and change the way modern society did business?

Well, there was only one way to find out.

In January of the year that I graduated from high school, Roots began airing in an unprecedented eight-consecutive-night run. ABC had no idea what to expect from the public. The series would depict unprecedented cruelty, violence, and innuendo. But there was nothing titillating about it. It was a serious story that ended up hooking the nation and keeping it glued to their sets for an entire week.

Alex Haley wrote his book in 1976, and it was a smash. ABC immediately cut a deal to make it into a miniseries. 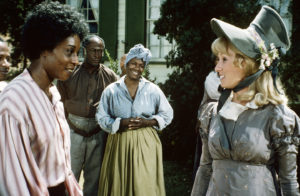 The concept of the miniseries was itself relatively new. In 1976, Rich man, Poor Man was a hit, although it was broadcast on a weekly basis. The idea of showing one series over consecutive nights was revolutionary.

After all, who was home to watch TV every night? The VCR was an expensive toy that most households did not yet own. Would viewers lose interest if they missed an episode? Would anyone bother to keep up with something that took eight days to play out?

Indeed, ABC execs worried that the historical drama about slavery’s cruelty would be a ratings disaster.

Instead, history was made. Each night, record numbers of viewers tuned in to see the saga of Alex Haley’s ancestors. I recall that Roots was all anyone in school could talk about. It was the same with the entire nation. 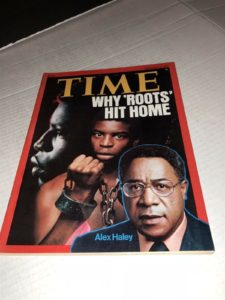 The series stretched what censors would allow. But it was necessary in order to present the gritty tale that Haley told. After all, we’re talking about humans being owned by other humans, being transported across a wide ocean in nearly unbearable conditions, and being punished with physical torture when they made mistakes in the eyes of their owners. Sugar-coating was out of the question.

One of the things that made Roots successful was its cast. An unknown named LeVar Burton stole the show as the young Kunta Kinte. John Amos showed that he was capable of more than being a sitcom actor. Other towering talents that shone included Lou Gosett, Jr., Cicely Tyson, Leslie Uggams, Ben Vereen, Maya Angelou, Chuck Connors, Ed Asner, and many more. Even O.J. Simpson showed up, back when we all loved him.

The storyline was gripping, too. We anguished with Kunta Kinte when he was captured by slavehunters. We ached when he was punished for running away by the partial amputation of his foot. We wept when Chicken George missed gaining his freedom by losing a cockfight. We felt the rage when family members were separated by mere economic decisions to sell some of them off. We mourned elderly Chicken George’s death in a fire.

We cared deeply about these people, and they became our family members too, even if we happened to be WASP’s with European roots of our own.

The series was rerun the next year, and Roots II also did very well when it was televised.

I would like to think that Roots removed a lot of racial prejudice from those who watched it. That would be its ultimate accomplishment.