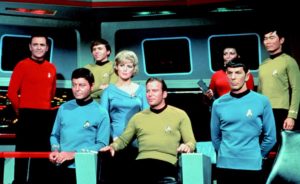 The episode, as any trekkie knows, was The Man Trap. The show created a stir among science fiction fans, but it wasn’t the stir that would explode after its cancellation three years later.

Science fiction was pretty amateurish stuff on TV and the movies before Star Trek. Lost in Space was a hit, but there wasn’t a whole lot of credibility in its storyline. In fact, many fans tuned in for the camp, like they did with Batman. Hollywood really hadn’t topped 1951’s The Day the Earth Stood Still for realism and a good storyline. But when Star Trek came along, concepts were revealed that had a sense of possibility about them.

For example, how did you get around faster than 186,282 miles per second (it’s not just a good idea. It’s the LAW)? Easy, you used your warp drive, that would somehow change the nature of space and enable you to travel faster than light without going backwards in time. Hmm, that just might work!

Another means of transportation was beaming. Your atoms were transformed into energy and sent as a beam to a nearby location, where they were reassembled. The process was limited by distance, as well as the need for exact coordinates for your destination. Again, this sounds like it might be doable with future technologies!

They even explained why all aliens spoke perfect English: the universal translator! Of course, that didn’t explain why their lips would form the words perfectly.

So Star Trek managed to fire the imaginations of its viewers. But what it DIDN’T do was attract large numbers of viewers. It was maddening to Trek fans that the aformentioned Lost in Space, with its “Crush! Kill! Destroy” spouting robot, consistently beat out TOS (as it’s now known among aficionados), and in fact was canceled due to the high cost of its episodes, rather than poor ratings.

So, after three seasons, the plug was presumably permanently pulled on the adventures of Kirk, Spock, McCoy, Sulu, Scotty, Chekhov, and Uhuru.

How wrong that assumption was.

Fans immediately began writing letters to NBC demanding their show be returned. The deluge only grew with time, and by 1973, NBC began airing a really bad sequel: Star Trek: The Animated Series. The show featured the voices of most of the original characters, But the animation was horrible, and the writing was suspect. It lasted parts of two seasons.

Star Trek: TOS was aimed at adults, in fact I recall commercials describing it as “an adult science fiction series.” But that didn’t stop us kids from tuning in in droves, or NBC from selling Star Trek toys.

It also affected subsequent science fiction on TV and the movies. Fans demanded more realism, and explanations of what was going on. This reached its climax with 1968’s 2001: A Space Odyssey. Stanley Kubrick’s masterpiece adaptation of Arthur C. Clarke’s equally magnanimous novel is the only SF film I have ever seen that refrains from making spaceships go by with a whooshing sound, impossible in space’s vacuum.

But even though the Enterprise whooshed across the screen, you have to admit that video science fiction overall has become better, thanks to Star Trek’s more sophisticated audience.

But we’re still not happy about TOS’s cancellation back in 1969.